Chemical structures of the five nitrogenous bases are shown below. The red N atom in each molecule is the point of attachment for a sugar molecule (ribose or deoxyribose). 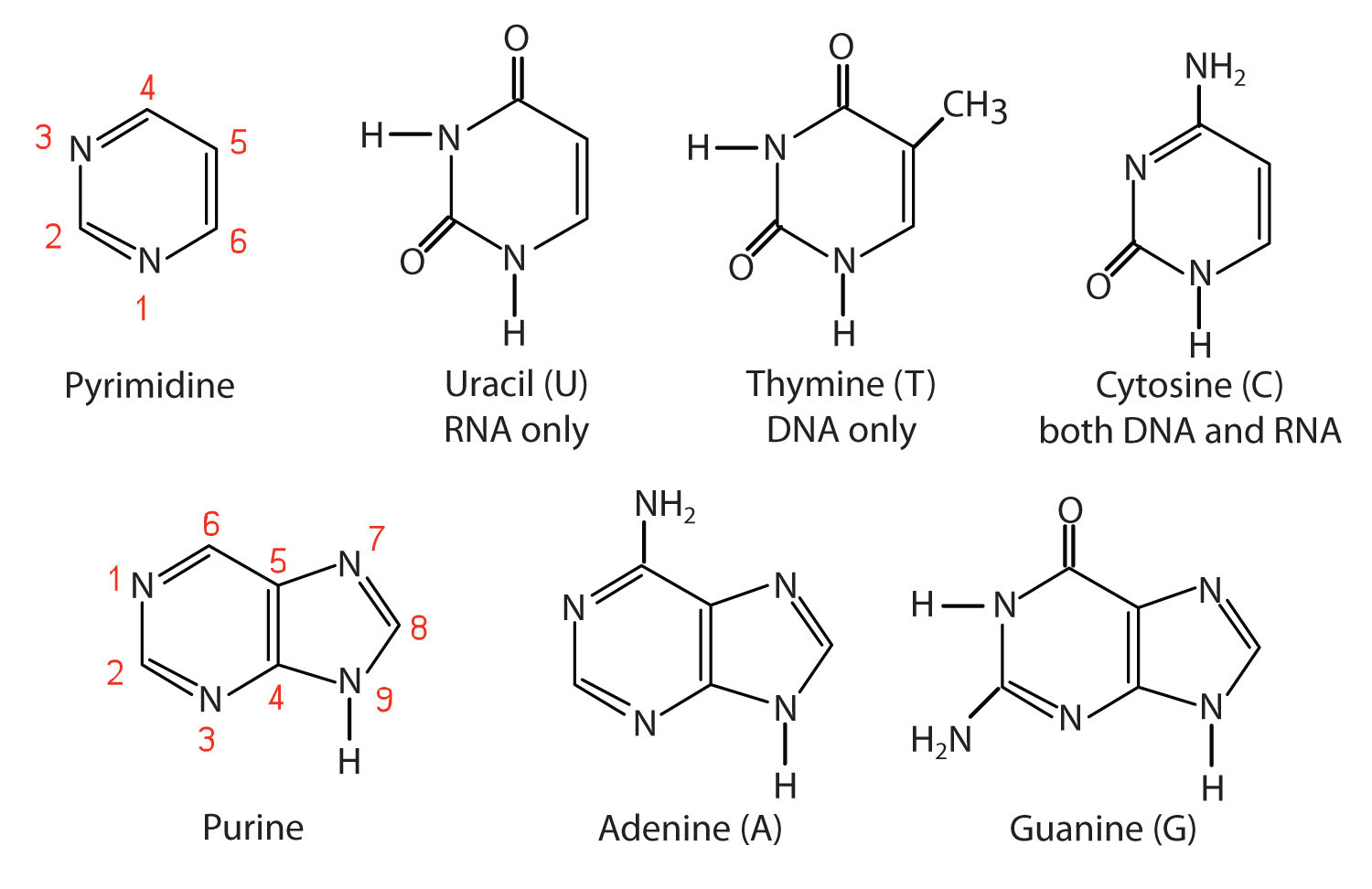 These five nitrogenous bases are all planar molecules, meaning that they are fairly flat and rigid.

Examine the structure of one nitrogenous base molecule by clicking on the button below (wait a few seconds for it to load in the space at right). You may click and drag the molecule to rotate it in three dimensions.

The green bond represents the point of attachment for a sugar (ribose or deoxyribose).

What is the nitrogenous base displayed in the computer model?

A nitrogenous base with a 5-carbon sugar attached is called a nucleoside.

Nucleosides have slightly different names than their nitrogenous base parents, and depend upon the identity of the sugar.

dT = thymidine (naturally only found with deoxyribose, in DNA)

U = uridine (naturally only found with ribose, in RNA)

Examine the structure of one nucleoside molecule by clicking on the button below.

What is the identity of the nucleoside displayed in the computer model?

A nucleoside with one or more phosphate groups attached to the sugar is called a nucleotide.

The name of a nucleotide is the corresponding nucleoside name, followed by the word 'monophosphate,' 'diphosphate,' or 'triphosphate' to indicate the number of phosphate groups attached to the sugar.

Click the button below to examine the structure of a nucleotide triphosphate.

What is the identity of the nucleotide triphosphate displayed in the computer model?

When incorporated into nucleic acids (DNA or RNA), nucleotides are present in the monophosphate form.

Click the button below to examine the structure of deoxyadenine monosphosphate (dAMP).

Notice the angle of the sugar and phosphate groups in relation to the planar nitrogenous base.


Structure of the DNA Double Helix

In double-stranded DNA, two long molecules twist around one another in a double helix. These molecules are deoxynucleic acids (DNA): polymers made up of nucleotides

In a DNA double helix, the phosphate and sugar groups make up the outer 'backbones,' and the flat nitrogenous bases are pointed toward the middle of the helix.

Click the buttons below to examine a segment of a DNA double helix from many angles. The first button has colored the backbone sugar and phosphate groups purple to simplify the image.


One key point to notice in the DNA double helix structure is that the planar nitrogenous bases from the two strands are pointing toward each other, in the middle of the helix.

Pairs of nitrogenous bases are set in the same plane, and interact with each other via hydrogen bonding. These pairs are often referred to as base pairs, abbreviated 'bp.'

Recall that electronegativity values generally increase toward the top and right of the periodic table, as illustrated in the image below.

Oxygen and nitrogen are electronegative atoms found in nitrogenous bases. They are represented in models by the color conventions: red for oxygen, and blue for nitrogen.

The dotted line in the image below represents the non-covalent attractive force between a hydrogen bond donor (H atom with little 'ownership' of its valence electrons) and a hydrogen bond acceptor (electronegative atom with at least one lone pair of electrons).

Many of the oxygen, nitrogen, and hydrogen atoms in the nitrogenous bases are very effective hydrogen bond donors and acceptors, as illustrated in the image below. 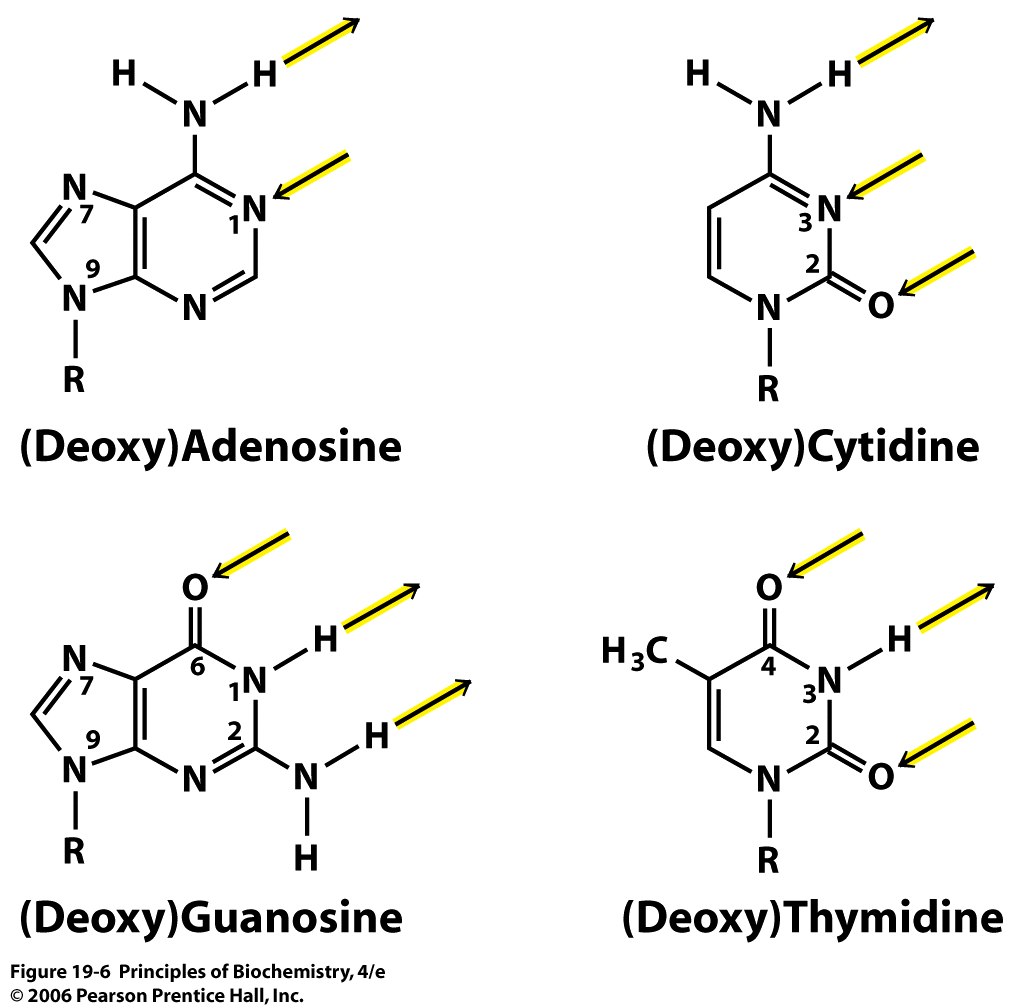 Let's examine a single guanine residue to identify potential hydrogen bond donors and acceptors.
Guanine will be highlighted in yellow, and the attached sugar and phosphate in the backbone will blink purple.


Keeping in mind the point of sugar attachment, we can identify guanine's hydrogen bond donors and acceptors that are available to interact with a paired nitrogenous base.

Locate these parts of the molecule yourself, then click the button below to see the relevant atoms blink yellow.

Which of the following statements best describes the hydrogen bonding potential in guanine?

Now let's examine a cytosine residue in the same way.


Can you find one H-bond donor and 2 H-bond acceptors in cytosine?

Examine the molecule yourself, then click the button below to see the relevant atoms blink green.


Guanine and cytosine make up a nitrogenous base pair because their available hydrogen bond donors and hydrogen bond acceptors pair with each other in space.

Guanine and cytosine are said to be complementary to each other.

This is shown in the image below, with hydrogen bonds illustrated by dotted lines. The button below the image highlights the hydrogen bonds between guanine and cytosine in a DNA double helix.

Hydrogen Bonding in a GC Base Pair"


Adenine and thymine similarly pair via hydrogen bond donors and acceptors; however an AT base pair has only two hydrogen bonds between the bases.

Examine the image and click the button below to explore hydrogen bonding in an AT base pair." 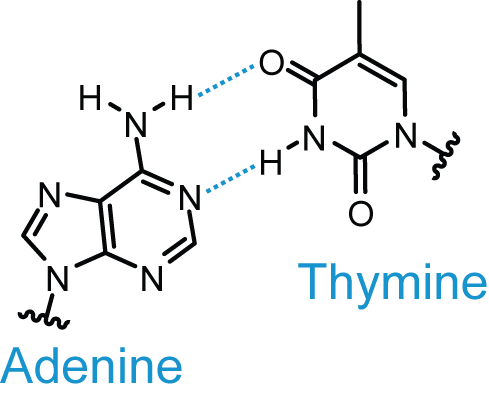 "
Hydrogen Bonding in an AT Base Pair


Significance of Hydrogen Bonding in Complementary Base Pairs

Hydrogen bonds are weak, noncovalent interactions, but the large number of hydrogen bonds between complementary base pairs in a DNA double helix combine to provide great stability for the structure.

The same complementary base pairing discussed here is important for RNA secondary structure, transcription, and translation. In these applications, uracil takes the place of thymine, forming a complementary A-U base pair.

Examine the structure of uracil in the image above, and compare it to thymine. How many hydrogen bonds will form in an A-U base pair?