β-lactams are an important class of antibiotics that work by inhibiting cell wall synthesis in bacterial cells. This group of antibiotics is commonly used due to their low toxicity, availability, and affordable cost. β-lactams have the same active site and the same general structure– the β-lactam ring (fig. 1). This structure, the β-lactam ring, is effective in killing bacteria. This chemical structure competes with the D-ala-D-ala peptide that is used in the cross linking step in peptidoglycan biosynthesis. The transpeptidase enzyme that cross links the D-ala-D-ala binds to the antibiotic instead and is rendered ineffective, therefore, compromising the cross linking step in cell wall synthesis (video 1).

Video 1- β-Lactams: Mode of Action and Mechanism of Resistance TEM-1 is the most common extended spectrum β-lactamase present in Gram negative bacteria. This protein confers resistance to a variety of β-lactams antibiotics including ampicillin, penicillin and several cephalosporins.

Describe the elements of secondary structure present in TEM-1.

Exploring the Active Site of TEM-1

List the amino acids shown in the active site of TEM-1.

Briefly describe the size and biochemical properties of the amino acids present in the active site of TEM-1. Are they polar, nonpolar, acidic, basic, etc?

TEM-1 is a classified as a serine enzyme because it uses Ser70 as nucleophile to attack the carbon in the β-lactam ring of antibiotics. Benzylpenicillin is one of the substrates of TEM-1. When this drug binds the active site of TEM-1 the β-lactam ring is positioned near Ser70 through hydrogen bonding involving various amino acids residues. Let's take a look at the catalytic mechanism of TEM-1. Then, we will explore the the chemical structure of Benzylpenicillin and the acyl-enzyme reaction intermediate formed during catalysis.

This image shows the open structure of benzylpenicillin after nucleophilic attack by ser70. Notice the acylenzyme intermediate between carbon that used to be part of the β-lactam ring and the oxygen atom of the Ser70.

NDM-1 is present in multi drug resistant bacteria, called superbugs. It can inactivate many β-lactam antibiotics including penicillins, cephalosporins, and carbapenams by hydrolyzing the β-lactam ring. NDM-1 has a broad, hollow active site that accommodate different classes of β-lactams. The enzyme uses a modified catalytic triad with a Zn ion instead of a serine residue. Here we will explore the structure of NDM-1 bound to different antibiotics.

How many subunits are present in NDM-1?

These Jmol animations zoom in on the active site in one of the chains, showing the two Zn ions in orange and the amino acid side chains in CPK.

Which amino acid side chains coordinate the Zn ions?

Comparison of the reaction mechanisms for TEM-1 (A) and di Zn II Class B1 β-lactamases (B). 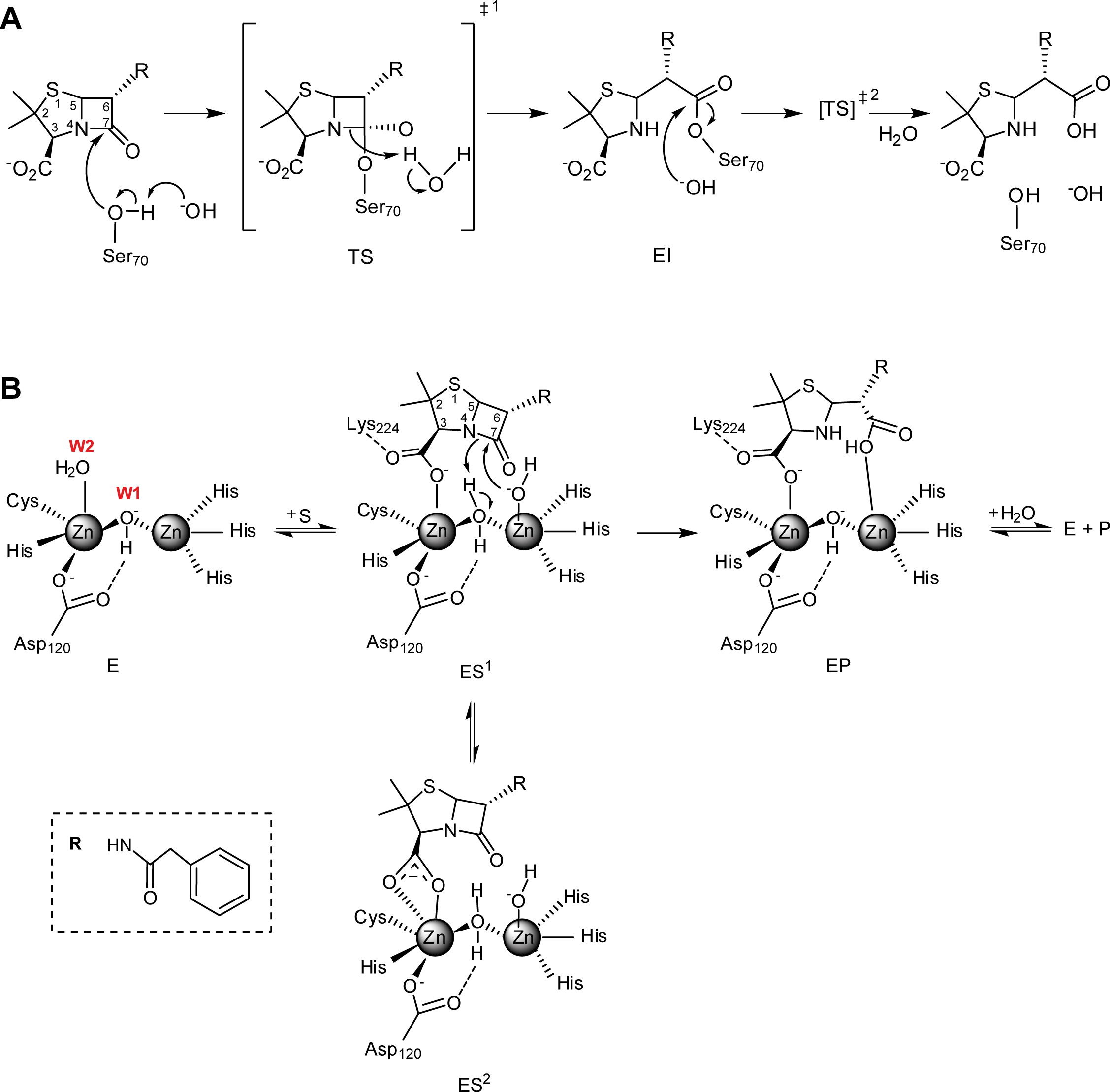 How does the reaction mechanism for TEM-1 differ from Class B1 metallo lactamases?

How does the active site of NDM-1 compare to that of TEM-1?

Why is NDM-1 able to hydrolyze many different types of β-lactams?